What is the Google Sheets QUERY Function?

The Google Sheets QUERY function empowers you to execute queries written in an SQL-like language called Google Visualization API Query Language in Google Sheets. These queries allow you perform database-type searching in Google Sheets, so you can find, filter, and format data with maximum versatility.

Specifically, the function allows you to apply a query to a Google Sheets data table. This enables you to extract data subsets from the main dataset. You can think of a query as a combination between a filter and a pivot table. The QUERY function helps you inspect areas of interest within your data to gain better and deeper insights.

Using the Google Sheets QUERY function has several benefits, including the following.

In our work with teams from all over the world, these are some of the most common benefits we’ve seen for the QUERY function, though others certainly exist.

Below is the breakdown of the three arguments:

Let’s take a look at a sample QUERY function:

The query_string (or query statement) is the string enclosed in quotes. It selects columns C and E from the data in this case.

The number 2 tells the function that the original dataset contains two header rows. The argument is optional, so Google Sheets will automatically determine it if you omit it.

Essentially, the function reads the given query in the query_string and applies it to the data. Then, it returns the resulting table acquired after the query runs.

Below are the typical components of a query_string.

Clauses are parts of a query that let you filter the given data.

Some clauses allow you to customize how you want to query your data. For instance, using the SELECT clause lets you choose specific subsets of columns from your dataset.

On the other hand, the WHERE clause filters the selected columns based on a condition to supplement the SELECT clause.

Arithmetic operations are essentially basic expressions consisting of a constant, variable (or scalar function) and operators such as subtraction(-), addition(+), division(/), multiplication (*), and modulus (%).

You can use the operators to select data from your main dataset to perform mathematical operations.

Arithmetic operations can also include comparison operators such as >, <, =, <=, >=.

What to Consider Before Running a QUERY Function

Below are a few tips to help ensure your QUERY function runs properly and without any issues.

Follow the examples below to learn how to use the Google Sheets QUERY function.

How to Use the Google Sheets QUERY Function

We’ll use a named range to identify the data. It makes it cleaner and easier to use in the QUERY function.

A side pane will appear on the right side of your Google spreadsheet. Input a name for your data table for easy reference.

Now we can start leveraging the QUERY function in Google Sheets.

First, retrieve specific columns from your table with a Query function. Select a cell on the right side of the table (cell F1 in this example) and type in this QUERY function:

A and B refer to the original table’s column references in the QUERY select statement.

We want to select columns A and B, so your output table should retrieve and display the Rank and Country columns.

Use the SELECT * statement to retrieve all the columns from the data table.

Select a cell on the right side of the table (cell F1 in this example). Input the QUERY function using the named range notation:

If you’re not using Named ranges, your formula will look like this instead:

We’ll use the named range “countries” for the rest of the queries in this guide, but you can use the regular range reference if you want.

Hit Enter after typing in the Query. You should see the output table. The output from the query is the entire table since SELECT * retrieves all the columns in the countries table.

Use the WHERE keyword in your QUERY function to specify a condition that must be satisfied to filter your data.

Modify the Google Sheets QUERY function we used earlier to select the countries with a population greater than, let’s say, 10 million.

The WHERE keyword comes after SELECT.  Your output table should look like this.

Let’s do another one.

We’ll use the WHERE keyword to specify Asian countries only in this example.

Modify your formula to this:

Unlike the numeric example earlier, you need to enclose the word Asia in single quotes within the query formula, or you’ll get an error.

Your output table should retrieve all the specific countries in Asia. 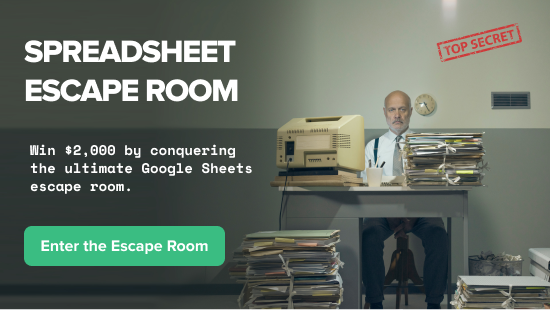 We’ll sort the data by population (from largest to smallest) in the following example.

Insert the WHERE keyword into the old query formula. Then add the ORDER BY keyword and specify a descending direction using DESC (descending).

If you want to sort your data by country in ascending order, modify your formula to this:

The resulting output table should display the countries in ascending order (smallest to largest population).

If you want to restrict the number of results returned from your data, use the LIMIT keyword in your QUERY function.

Place the LIMIT keyword after SELECT, WHERE, and ORDER BY.

For instance, if we want to return only the first 15 results from our data, our formula should be:

You can perform standard mathematical operations on numeric columns using the QUERY function in Google Sheets.

As an example, let’s determine the percentage of the total world population that each country accounts for.

Divide the population column by the total world population (7,162,119,434). Then, multiply the amount by 100 to calculate the percentages.

This is what the calculation looks like as a QUERY formula:

The third column in your output table should show the corresponding percentages for each country. You can format the output column to display the numbers up to two decimal places.

Rename your column headings easily using a LABEL keyword in your QUERY function. Place the LABEL keyword after the query statement.

For instance, you can change the header of the output column (the third column) in the table where we retrieved the population percentages.

Modify your formula to this:

Besides calculations, you can use other functions in a QUERY, including average, min, and max.

In this example, let’s calculate the max, min, and average populations in the “countries” dataset using these aggregate functions in your query.

The Query function returns the original dataset’s min, max, and average populations, so our output should look something like this.

You can use the GROUP BY keyword with aggregate functions to summarize your data into groups (similar to how a Pivot table does).

We’ll summarize the data by continent and count the number of countries (per continent).

Tweak the query formula and include a GROUP BY keyword. Also, use the COUNT aggregate function to count the number of countries.

Ensure that each column in the SELECT statement is aggregated (min, max, or counted) or appears after the GROUP BY keyword.

The output for your QUERY function now appears as:

Tweak the formula to read:

Let’s break down the Query function into lines to make it easier to understand.

The QUERY function summarizes the data for each continent, sorts it from the highest to the lowest average population, and limits the results to the top five.

Other keywords you can use in your Google Sheets Query function include OFFSET, OPTIONS, FORMAT, and PIVOT.

You can also use other functions to add a total row, including using dates as filters in your QUERY formulas.

The Google Sheets QUERY function is a robust tool, but stale data, manual data updates, and other common spreadsheet limitations can dilute the power of the function. However, new solutions such as Coefficient are erasing these shortcomings. Coefficient is a free Google Sheets add-on that can simplify and streamline querying data in your spreadsheet.

Coefficient automatically syncs Google Sheets with your business systems. Now you can connect live data from any system to your spreadsheet in seconds, including HubSpot, Salesforce, Jira, Snowflake, Google Analytics, MySQL, APIs, data warehouses, and databases. These connected spreadsheets enable your QUERY functions in Google Sheets to leverage real-time data at all times.

Coefficient also allows you to run queries in SQL, SOQL, and other query languages against your systems directly from Google Sheets. And with a data inline previewer, Coefficient enables you to query and customize data tables through a no-code, graphical UI. Coefficient helps make the often complex undertaking of querying data easier, whether you want to dive into SQL, or use a point-and-click substitute.

The QUERY function brings the power of database-style lookups to Google Sheets. Now you can combine the capabilities of some of the most incisive functions in Sheets under a single umbrella. And by adding a solution such as Coefficient, you can unlock the full potential of the Google Sheets QUERY function with connected spreadsheets, real-time data, and more versatile queries. The Ultimate Guide to Using Pivot Tables in Google Sheets